Nicki Minaj is getting candid.

The music superstar took to Twitter Spaces, where she revealed the reason why she passed on Doja Cat‘s ‘Get Into It (Yuh).’

“The truth is, she asked me to get on that song. It’s not that I’m too busy at all. It’s just, there were middle people involved in that situation so I had told her, if it was like how me and BIA were direct and we dealt with each other directly, it would be different.”

Nicki Minaj talks about Doja Cat and Get Into It (Yuh) ❤️ pic.twitter.com/faJfieR1bu

Later on, the ‘Seeing Green’ rapper went on to reveal that other artists have sent her material, but she insists that she is focused on finding “the right thing.”

Elsewhere, Minaj revealed that she does not intend to do a ‘Way 2 Sexy’ remix with Drake from his ‘Certified Lover Boy’ album. 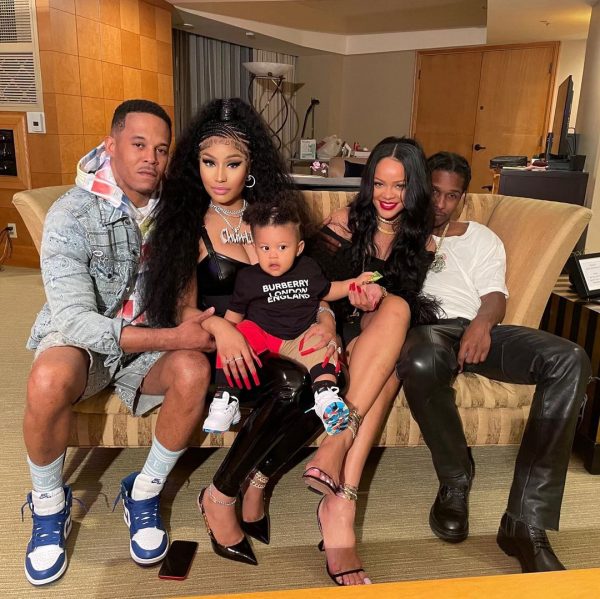 Nicki Minaj and Rihanna put rumors of a rift to rest.

For, the music titans linked up for a family affair.

Moments ago, Minaj shared pics and clips of herself with Rih, her son, and the singer’s niece Majesty.

Also with them were their respective partners, Kenneth Petty and A$AP Rocky.

Onika shared with the captions: 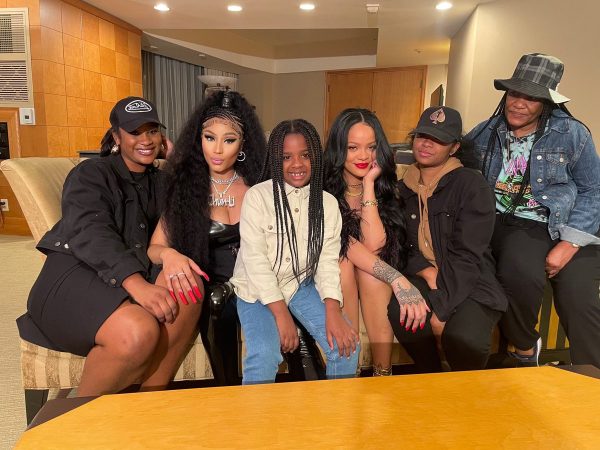 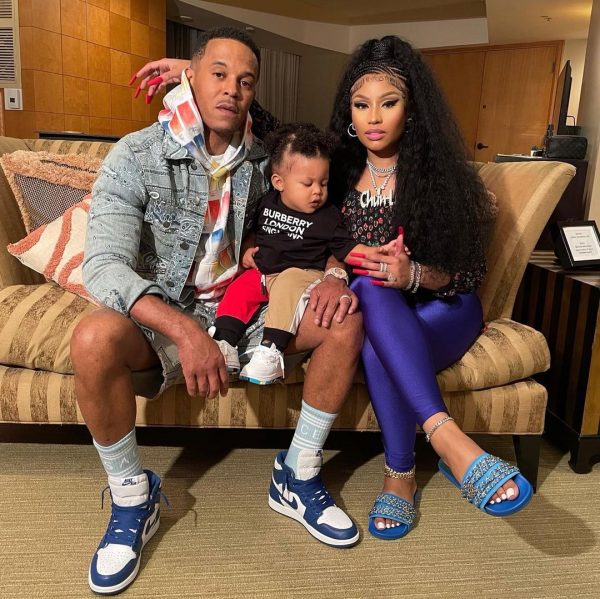 All the mushy stuff aside, surely we’re not the only ones wanting a new collab from the ladies?! 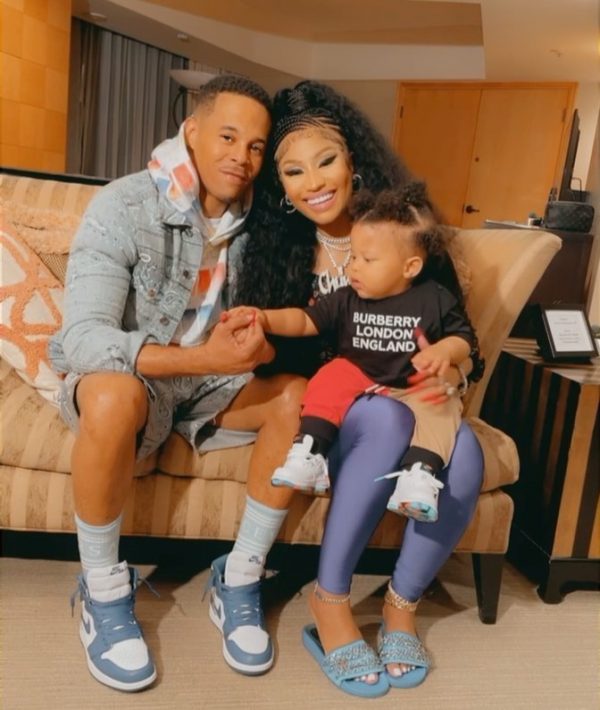 Nicki Minaj has maintained a notable air of privacy since giving birth to her son last year.

However, today the rap pioneer was in a sharing mood.

For, she unwrapped new pictures and videos of the 11-month-old – who she has affectionately nicknamed “Papa Bear.”

Minaj was joined by her husband and the child’s father, Kenneth Petty.

Peep their latest family portrait below…

Onika will be bringing fans in even closer when she premieres her HBO Max documentary – tentatively ‘Nicki’ – later this year. 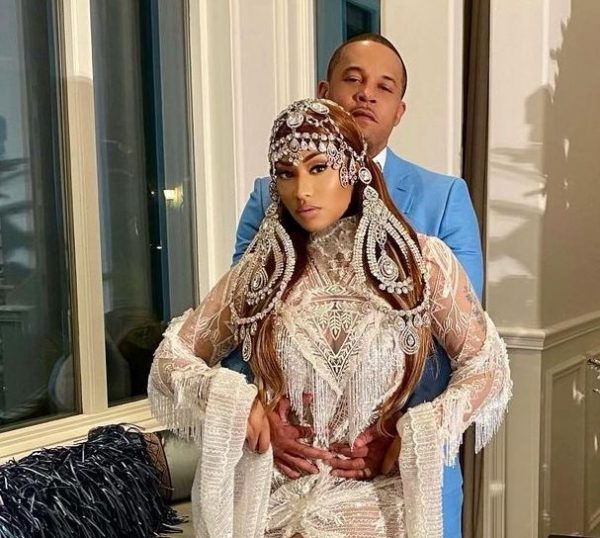 Nicki Minaj and her husband Kenneth Petty are being sued and it’s by the woman he was convicted of attempting to rape in 1995.

According to TMZ, Jennifer Hough is alleging she is being intimated and harassed by The Pettys. Both directly and indirectly.

In formal papers filed, she claims she was threatened and advised to not speak about the incident. She says this caused her emotional distress. 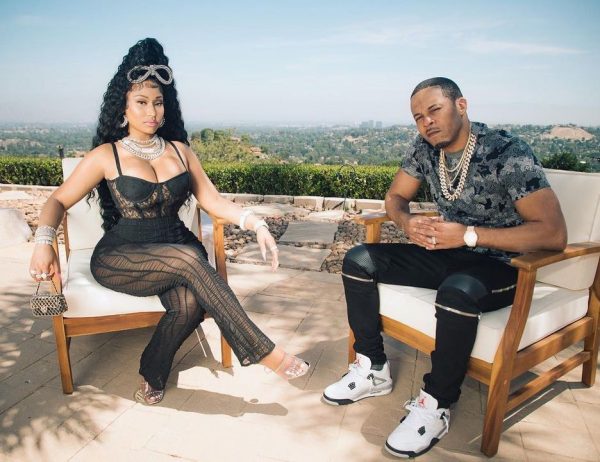 In docs, Hough asserts that the drama began when Minaj and Petty reignited their relationship in 2018. Specifically, when  Minaj allegedly made comments about how Petty was “wrongfully accused.”

Hough claims the rapper suggested she had denied the rape claims – something she insists she hadn’t.

Furthermore, Hough says that in March 2020 – following Petty’s arrest for failing to register as a sex offender – Minaj allegedly called her and offered to fly her and her family Los Angeles. This, allegedly in exchange for assisting Petty by recanting her rape claims.

According to Hough, when she denied the alleged offer, she and her family “suffered an onslaught of harassing calls and unsolicited visits” within days. She claims Minaj had folk reach out to her brother and offer a $500,000 payment in exchange for a statement withdrawing her rape allegations against Petty.

Hough also alleges in the filing that Minaj sent layers to her home to pressurize her into recanting; a development she says left her feeling panicked and unsafe. She ultimately moved from her home in August 2020, which she asserts was as a result of the worry.

She’s suing Minaj and Petty for intentional infliction of emotional distress, harassment, and witness intimidation. Additionally, she is suing Petty for sexual assault tied to the conviction in 1995.

For, she allegedly has snagged a Nicki Minaj feature for her debut solo single.

According to a new report, Nelson’s debut single will be called ‘Boys’ and will allegedly feature the ‘Super Bass’ rapper. It goes on to allege that the single will be released in the next few weeks.

The news comes after Nelson wiped her Instagram account clean and after Nicki followed her on the platform.

The former Little Mix member teased the release of her first solo song back in June after she signed a solo album deal with Polydor.

Neither artist has confirmed the news at the time of reporting. 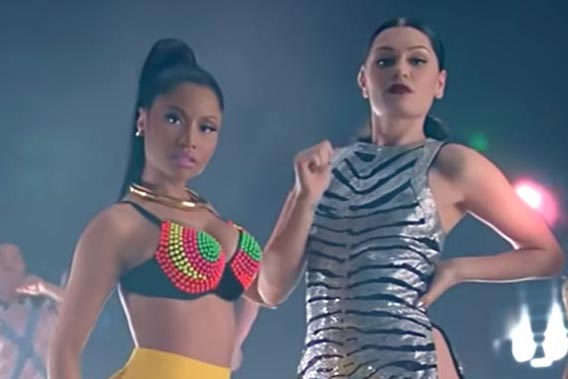 Jessie J is speaking up and out after a surprising remark was aimed at her by Nicki Minaj.

As reported, the femcee made a public objection to a comment J made about the creation of their 2014 smash ‘Bang Bang’ during an interview.

Minaj’s move shocked many, given that the British belter was in actuality praising her and expressing her joy at working with the rap royal on the song – which also featured Ariana Grande.

However, it’s clear Onika felt it imperative to set the record straight as relates to how she landed on the track.

Now, J is weighing in.

“I respect you publicly being yourself @nickiminaj • So here I am being myself.

It was made into a meme about 2 weeks ago. Is that what this is really about? And where this weird energy between us began?
Or maybe it was when you used me as a stair rail at the AMAs. That was also funny af 😂

If we can’t laugh in the lives we have been blessed with. What’s the point. It really isn’t that deep.

From the moment I met you to now I have shown you nothing but love and gratitude for how f***ing blessed I was to have you and @arianagrande who btw wrote Bang Bang with the insanely talented Max Martin which I found out today. Jesus. What a day. Sorry Ari. I never knew. Wild.

“I felt like I had won a competition” did back then and still do now.

I’m the first person to admit Bang Bang would NEVER have been what it was without you guys.

I’m sorry I got the story wrong all these years, I was told you heard the song and wanted to be on it by someone clearly gassing me up at the label. (Bless them and my naive ass) Thank you for clarifying I was wrong on that and Do it like dude 😂 Told me huh.

What a way for us to celebrate the 7 year anniversary of the song. 😩😂 Should we all go for dinner? No… Probably not right.. Too soon? Bang bang part two?… No…. Ok got it. Do it like a dude remix? Ok. I’ll stop.

Look, the song did it’s damn thing. I will never say you asked to be on the song ever again. Although all this drama means memes and man have the memes of me have kept me entertained all day. Swipe for a good old laugh.

Always love and light from me babes 🤍”

With that, what are… 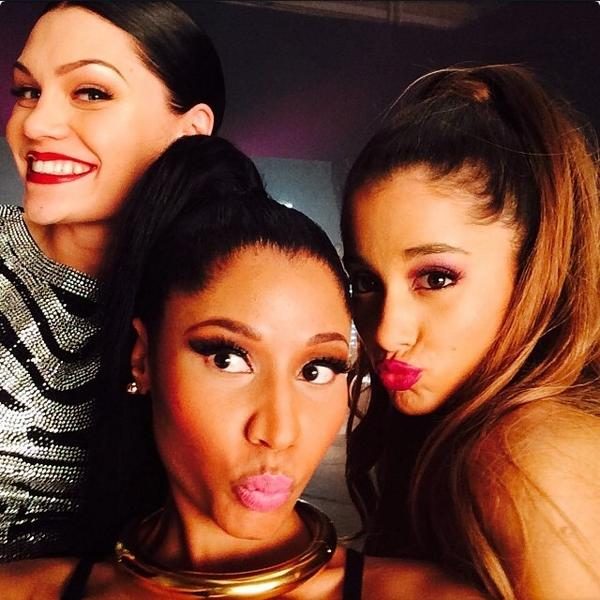 The 2014 hit, ‘Bang Bang,’ may be the highest RIAA-certified song of Jessie J, Ariana Grande, and Nicki Minaj‘s respective careers (as we reported here), but – despite the song’s massive success – there appears to be a bit of confusion about its origin story.

In celebration of its 7th anniversary last week (July 28), J took to ‘Glamour’ magazine to dish on the tune’s history – namely how she connected with Grande and Minaj in the first place.  While the tale seemed harmless to some, Nicki has taken umbrage with the description of how her sizzling Rap verse was added to the mix.

See what she said inside: 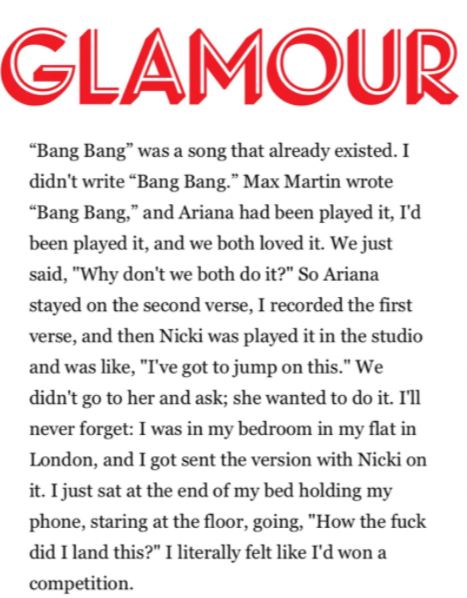 As seen in the excerpt above, J’s rendition of the ‘Bang’ origin story suggested Minaj proactively requested to be part of the song (despite not being asked).  The Rap Queen remembers things differently it seems. 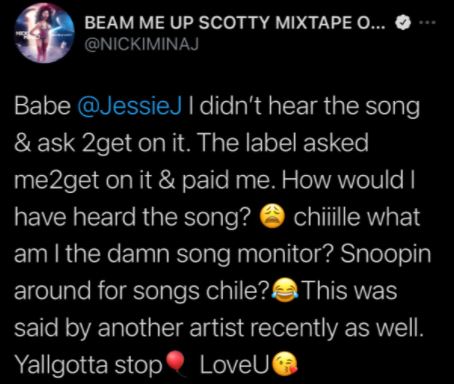 It appears Nicki Minaj is just as obsessed with the ‘Real Housewives of Potomac’ as the masses.

But it looks like she’ll be rewarded with the ultimate fan experience. Because she has revealed that she’ll be hosting the show’s season six reunion.

It appears Onika manifested the moment with a playful social media exchange.

See, it began with her sharing a fan-made remix of her smash ‘Moment For Life’ featuring the cast of the hit Bravo series. She jokingly teased that she wanted to host the reunion.

She also dived in the comments to respond to various cast members including Karen Huger, Gizelle Bryant, Candice Dillard, and Wendy Osefo.

Shortly after she took to Twitter with a text exchange to reveal that it will REALLY be happening: 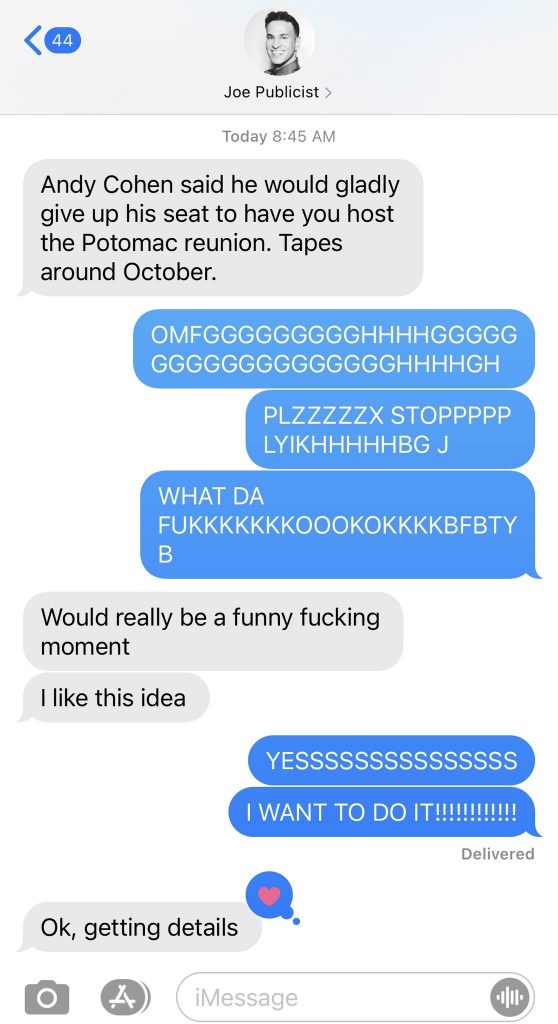 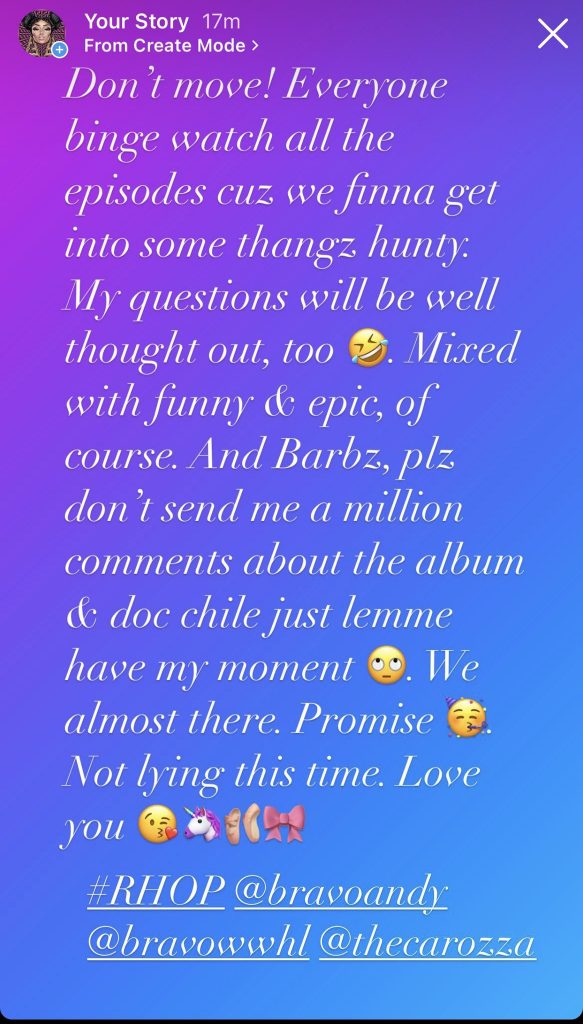 Now, this will be epic!

‘Potomac’ has been slaying in such a way that has folk calling it the new “it” girl of the ‘Housewives’ franchise. And a move like this will only reaffirm that the more.

Are you here for Ms. Minaj replacing Andy Cohen?! Let us know… 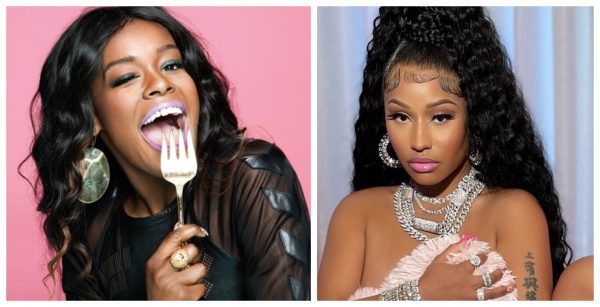 Azealia Banks is sounding off once again and this time it’s rap royal Nicki Minaj that appears to have her hot and bothered.

Find out why below…

Irked by a fan’s suggestion that she “could” have been a contemporary of Minaj and Megan Thee Stallion if she was not “unhinged,” Banks proceeded to throw jabs at both ladies.

“would much rather be ssri free and unhinged than fat and “tolerable” with a Percocet addiction. Barbs keep forgetting nicki is blacklisted for mocking the Vatican on live broadcast TV.” 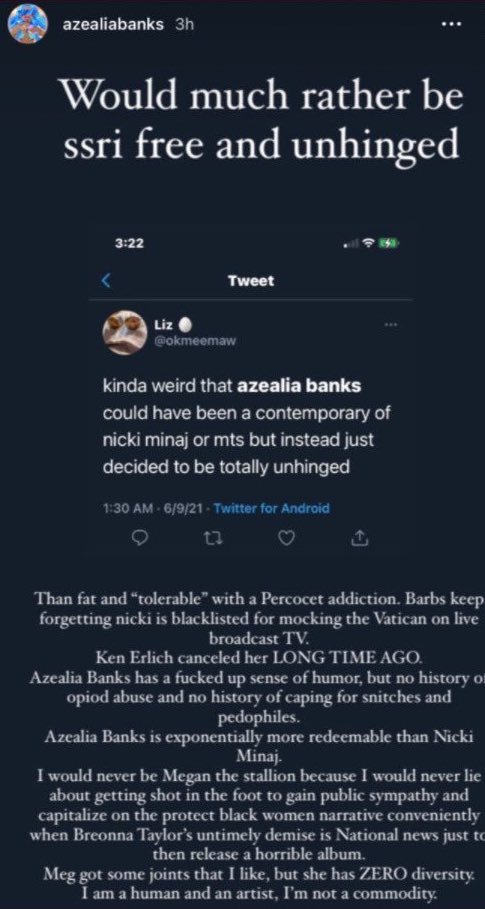 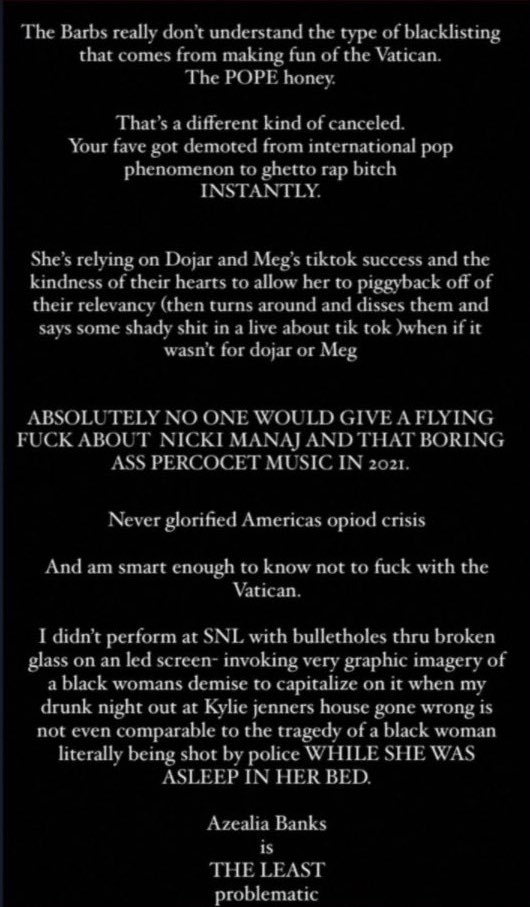 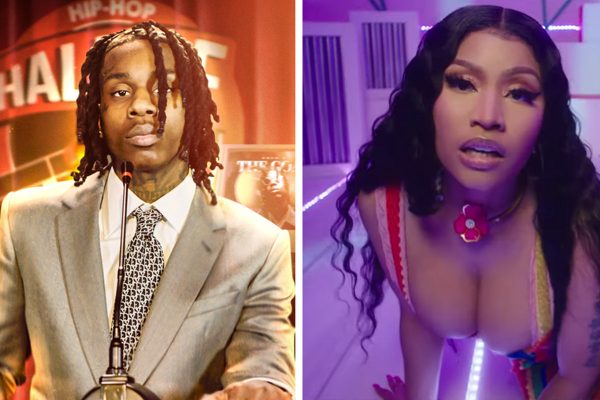 Just a year after dropping his sophomore album, ‘The Goat’ (which peaked at #2 on the Billboard 200), Polo G is looking to top the tally with his junior effort – ‘Hall of Fame.’

Released June 11, the 20-track project boasts no shortage of superstar co-stars with a guest list that boasts the likes of DaBaby, Pop Smoke, Roddy Ricch, Young Thug, and more. Among the most anticipated offerings of the LP, however, is the Nicki Minaj-assisted ‘For the Love of New York.’

A tale of a topsy-turvy love affair, ‘New York’ sees emcees trade verses over an island-inspired beat produced by CashMoneyAP.

Hear it in full inside: